Scala Contarini del Bovolo: history, prices and how to get there

The Scala Contarini del Bovolo, considered the most valuable and impressive example of a spiral staircase in Venice, was commissioned by Pietro Contarini towards the end of the 15th century to unify the two wings of the family palace and celebrate the prestige of his family. It is located in the San Marco district, near Campo Manin and overlooks a small courtyard which you can enter via a narrow calle: a rather hidden corner of Venice, without any view of the Grand Canal and away from the usual tourist routes, which leaves its visitors breathless precisely because of the unexpected presence of this magnificent work.

The staircase is considered the perfect synthesis of 3 architectural styles: Renaissance (for the use of some elements such as capitals), Gothic (for the construction technique) and Venetian-Byzantine (for the shape). It consists of 80 monolithic steps in Istrian stone with a trapezoidal shape and on the outside, it shows itself as a cylindrical tower of red bricks, interspersed with arches and balustrades, 28 meters high and covered by a semicircular dome with a lookout over the roofs of the city: a real rarity in Venice and one of the most characteristic symbols. 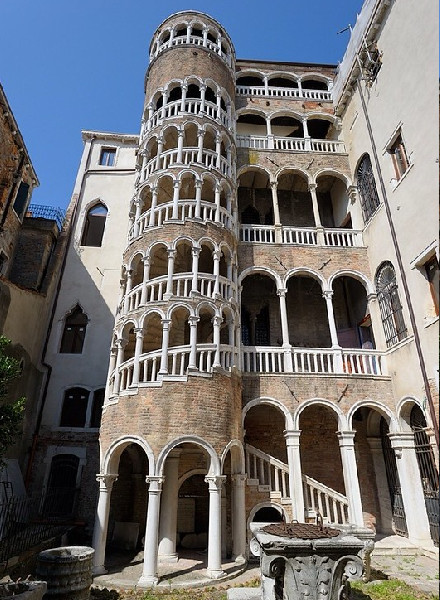 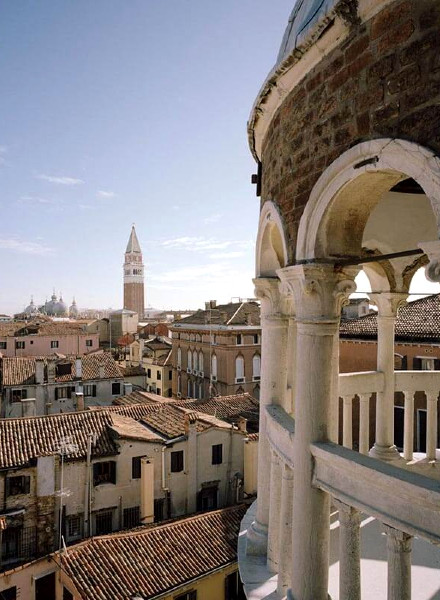 The history of the staircase

The staircase is an integral part of Palazzo Contarini, built in the 14th century and patrician residence of the same family.

The palace, which held a strategic position within the city, since it was right in between Rialto, the economic centre, and from San Marco, where politics and religion offices were, did not celebrate the prestige of the family in its external structure. lived there. In particular, its facade was considered too simple and therefore at the end of the fifteenth century Pietro Contarini decided to embellish it by commissioning the construction of a Renaissance-style loggia and a cylindrical tower, adorned with frescoes both inside and outside, of the which today unfortunately few traces remain.

The construction of the staircase, a real marvel for its grandeur and elegance, was the work of Giovanni Candi and had great resonance throughout the Venetian community, so much so that the name of “Contarini del Bovolo”, referring precisely to the shape of the staircase itself, a snail shell, called in Venetian” bovolo”.

The Contarini family left the palace in the seventeenth century and in the following centuries the building was destined for various uses as a rental house and hotel until the middle of the eighteenth century, to later become the administrative headquarters of a charity. These uses compromised the ancient splendor of the building, returned only after a long restoration completed in 2012. 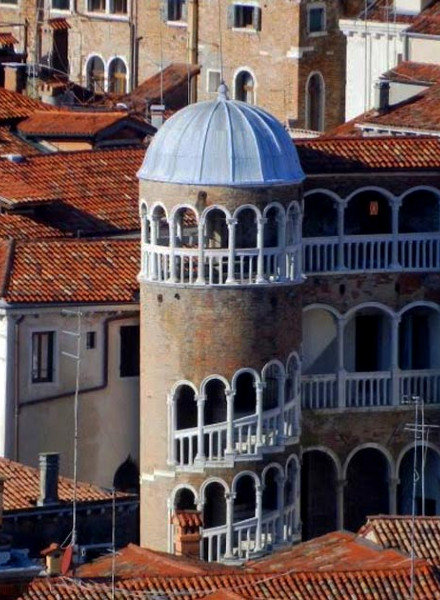 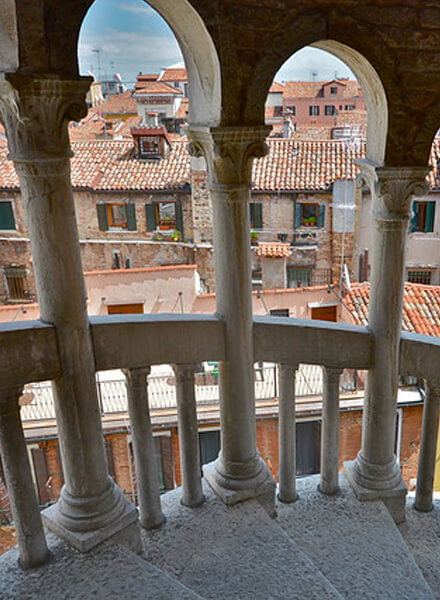 Not only facts but also legends

Palazzo Contarini and its famous staircase are linked to curious facts and legends.

It is said that the name of the street that leads to the building, called “Calle delle Locande”, and that of the court where the building overlooks, called “Corte Maltese”, refer to the inn called “Locanda della Scala”, open inside of Palazzo Contarini del Bovolo by Arnaux Marseille, known as “the Maltese”.

Popular rumors also tell that Arnaux Marseille, an adventurous and singular character, was the inspirer of Corto Maltese, the famous protagonist of Hugo Pratt’s comics and that a guest of his inn, the German astronomer Tempel, conducted his observations with his own telescope from the top of the Bovolo staircase, discovering comet C / 1859 and the Merope nebula.

The Contarini del Bovolo staircase is open every day from around 10am to 6pm. The ticket office closes 30 minutes before the monument closes. The entrances take place at minutes 00 and 30 and are limited. The visit lasts about half an hour. We recommend that you go to the staircase a little earlier and avoid the peak times (11: 30-12 and 15-15: 30). You can check the updated opening hours directly on the site.

The entrance ticket to the Contarini del Bovolo staircase allows access to the staircase, the Belvedere and the Tintoretto room, housed on the second floor of the building which collects a selection of sculptures and paintings from the Venetian art scene dating back to the 16th-18th centuries, including which stand out a sketch by Jacopo Tintoretto, a portrait by Francesco Guardi and a sculpture by Jacopo Sansovino.

The price of the combined ticket (Contarini del Bovolo staircase + Tintoretto room) is as follows:

Booking is recommended, but not mandatory and can be done on the website.

If you want to visit the staircase in a group (more than 9 people), remember that booking is mandatory and requires an increase in the ticket price of € 1 per person.

Map and how to get there

The Scala Contarini del Bovolo is easily accessible from the main attractions of the city, such as Piazza San Marco and the Rialto Bridge, but also from the nearby village Cavallino-Treporti coast, where Camping Ca’Savio is located.

You can walk to the staircase from the Rialto Bridge in just 6 minutes. The route is 450 m away. Here are our indications:

From Piazza San Marco, the route is even shorter (350 m):

If you stay at Camping Ca’Savio, do not miss the opportunity to admire the Scala Contarini del Bovolo and the numerous attractions located nearby. The campsite is only 40 minutes by boat from Venice and, once on the island, you can stroll through the streets of the city and reach the staircase in just 15 minutes. Check availability here or contact us to receive information about our accommodations and pitches. I hope to see you as soon as possible!