The island of Torcello in Venice: a guide to the visit

The island of Torcello is a small island located at the north-eastern end of the Venetian Lagoon, a few minutes by ferry from Venice (Italy).

Founded in the fifth century by the inhabitants of the Roman city of Altino, who settled there to escape the invasion of the troops of Attila, king of the Huns, Torcello is even older than Venice. From an important ancient island, with a population of about 20,000 inhabitants, Torcello turned into a swamp in the 12th century and a large part of its population died or moved to other islands following the spread of malaria. The buildings on the island were then looted and, although little of its splendid palaces, churches and monasteries remain today and it is almost uninhabited, Torcello is worth a visit for a little escape from crowded Venice and to enjoy its wonderful quiet.

The island of Torcello: geographical position and territory

The island of Torcello, located north of Burano and bounded to the south-west by the Burano canal, to the south-east by the Sant’Antonio canal and to the north by the Torcello canal, is surrounded by numerous sandbanks and bordered to the north and east with the marshes of Rosa and Centrega. Thanks to its central location within the Venice lagoon, the island is easily accessible from the nearby tourist resorts of Cavallino-Treporti (5 km), Venice (10 km) and Jesolo (20 km). Torcello currently has only about ten residents and its wild and timeless aspect makes it a unique destination for a walk immersed in the lagoon.

How to get to Torcello: connections with Venice and vaporetto

Torcello can be reached all year round by public transport, which connects it with the islands of Burano and Venice and with some beaches on the Venetian coast, such as Cavallino-Treporti and Jesolo.

If you are in Venice, just go to the “Fondamente Nove” pier and take the ACTV vaporetto – Line 12 to Burano and then Line 9 to Torcello. The journey takes about 1 hour and includes a short stop on the nearby island of Burano, which is only 5 minutes from Torcello.

If, on the other hand, you are staying in Cavallino-Treporti or Jesolo, you can reach Torcello starting from the Treporti feryy, which is about 5 km from Camping Ca’Savio. There the ACTV vaporetto is available – Line 12 for Burano and then Line 9 for Torcello. The journey takes about 40 minutes with a water bus change in Burano.

The ACTV water buses depart approximately every 30 minutes and the single ticket costs € 7.50 per person (valid for 75 minutes). If you want to visit other islands in addition to Torcello, you can buy a ticket valid for 24 hours at the price of 20 € per person. Children up to 6 years travel for free.

Finally, Torcello can be reached aboard a water taxi, which will offer a decidedly more fascinating transfer, but obviously more expensive (about € 115 from Venice), or take part in a guided tour to discover the islands of the Venice lagoon. 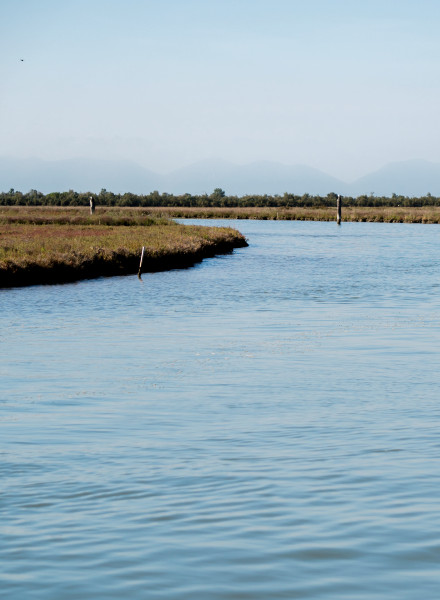 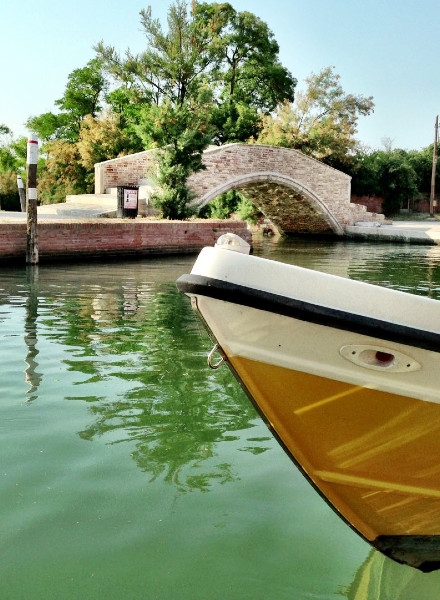 What to visit in Torcello: tours, churches, museums and timetables

Although semi abandoned and plundered in all its splendor over the centuries, Torcello still has enchanted corners, which attract many visitors who are passionate about art and history, attracted by its decadent atmosphere suspended in time.

The island is a real treasure trove of artistic treasures, considering that four buildings of very high cultural value overlook the small square of Torcello, such as the Basilica of Santa Maria Assunta with its bell tower, the Church of Santa Fosca and the Palazzo del Consiglio and the Archivio, which now house the Torcello Museum. The rich historical heritage of the island is completed by the Throne of Attila and the Devil’s Bridge, which can be admired along Strada della Rosina, which connects the pier with the square.

The Basilica of Santa Maria Assunta, a wonderful Venetian-Byzantine construction with three naves, is one of the oldest buildings on the island. Built in 639, the basilica still retains the portico of the ninth century and houses precious artistic works, including a wonderful Byzantine mosaic of the twelfth-thirteenth century, which represents the Last Judgment. To enjoy a decidedly splendid view of the surrounding lagoon, a visit to the 11th-century square bell tower is a must: it is nearby and the view of Torcello from above is truly breathtaking.

The Church of Santa Fosca

The Church of Santa Fosca stands near the Basilica of Santa Maria Assunta and the ancient 7th century baptistery. Dating back to the year 1000, it was built to house the relics of Santa Fosca da Ravenna, a third-century martyr, whose body lies under the altar. The interior of the church is in the form of a Greek cross and on the outside, there is a pentagonal portico with elegant Byzantine capitals. 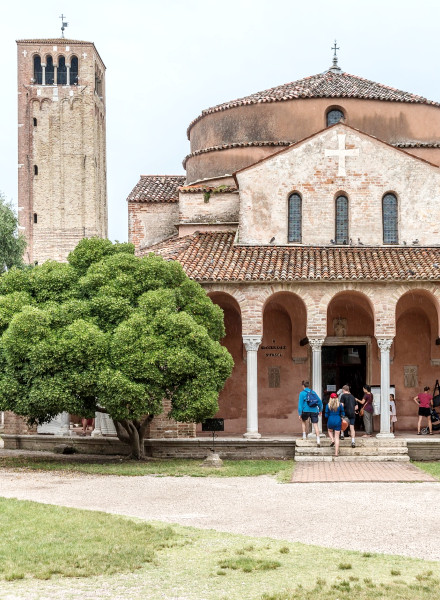 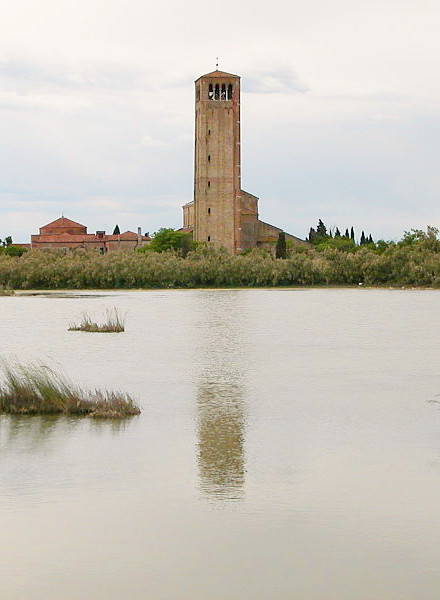 Located on the left side of the square, the Torcello Museum develops inside the Palazzo del Consiglio and the Palazzo dell’Archivio. Here, archaeological finds and works of art from the Latin, Byzantine and Medieval eras are exhibited, documenting the ancient history of the island and the surrounding lagoon, as well as the origins of Venice.

The Throne of Attila

Not far from the Basilica of Santa Maria Assunta and the Church of Santa Fosca stands the famous Throne of Attila, one of the symbols of Torcello. Erroneously attributed to the king of the Huns, who actually never reached Torcello, it is an imposing stone seat dating back to the fifth century, probably used as a seat by the Bishop of Torcello or by the governor of the island for the administration of justice.

The Devil’s Bridge and its legend

An obligatory stop in Torcello is the Devil’s Bridge, one of the most visited places on the island. It is a small bridge without parapets dating back to the fifteenth century, which is located along Strada della Rosina. Numerous local legends give this bridge a decidedly mysterious aura.

A legend tells that during the Austrian domination, a Venetian girl fell in love with an enemy officer. Their union was not well received by the young woman’s family, who, to prevent the continuation of this love, killed the soldier and removed the girl from Venice. The young woman, learning of the death of her beloved, turned to a witch, who entered into a pact with the devil: every year, for seven years on Christmas Eve, she would give the soul of a newly dead child to the devil, in exchange than that of the young Austrian. The place chosen for the meeting was the Torcello bridge. Here, the girl with a candle and a coin in her hand crossed the bridge, while the witch invoked the demon. The young man appeared on the other side of the bridge and took the girl away with him towards a happy future together. Soon the witch died, killed by a boy who had witnessed her pact and wanted to save the souls of innocent children. It is said that the devil, dissatisfied, shows up every Christmas Eve at the Devil’s Bridge to collect his payment in the form of a black cat. 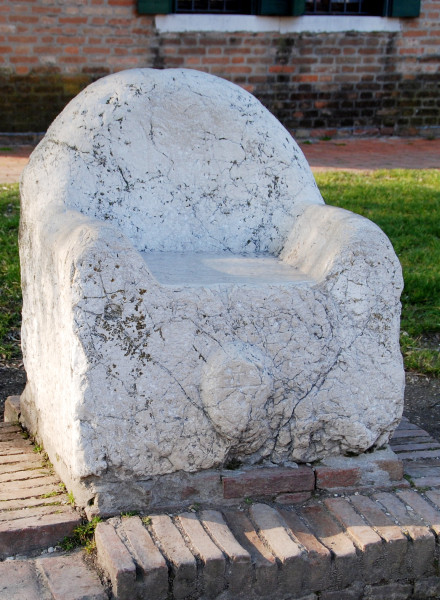 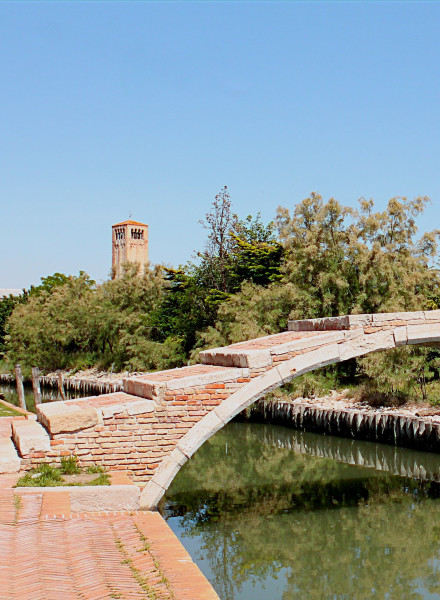 Where to eat in Torcello: local restaurants

The island of Torcello has always been loved by artists and writers for the quiet that distinguishes it. Ernest Hemingway, the famous American writer, also spent many years here looking for inspiration. From 1948 Hemingway retired to the famous Locanda Cipriani and began writing the novel “Across The River and Into The Trees”, in which his passion for Venice and the lagoon emerges.

Today the island is also appreciated for its prestigious restaurants, where you can taste the typical dishes of Venetian cuisine, prepared according to tradition or in a more modern way.

The most famous restaurants in Torcello are:

Where to stay in Torcello: hotels and holiday homes

Torcello offers few accommodation options, much more common, however, on the nearby island of Burano or even more on the Cavallino-Treporti coast, where there are numerous campsites, including Camping Ca’Savio, just 40 minutes by vaporetto from Torcello. Discover the offers and accommodation of Camping Ca’Savio and book your beach holiday just a few minutes from Torcello!