Sant’Erasmo: guide to the island and how to get there

Sant’Erasmo is the second largest island in the Venetian lagoon, second only to Venice, and is located near Murano, Burano and Punta Sabbioni. Far from the liveliness of the other islands in the lagoon, Sant’Erasmo is the perfect place for a pleasant and relaxing break. The island, about 4 km long, is ideal for a bike ride among the many vegetable gardens and vineyards or for a walk along the coast to enjoy the wonderful view of the surrounding lagoon or go bird watching. The island is also home to buildings of important historical and cultural value, such as the Massimiliana Tower and the Church of Christ the King and the famous “Bacàn” beach, much appreciated by Venetians.

The island of Sant’Erasmo: geographical position and the local area

Sant’Erasmo is one of the largest islands in the Venetian archipelago and is just a few minutes by vaporetto from Venice and the beaches of Cavallino-Treporti and the Lido of Venice. Surrounded by some of the most beautiful and evocative islands of the Venice lagoon, such as the islands of Burano and San Francesco del Deserto on one side and the islands of Vignole, Murano and Lazzaretto Nuovo on the other, Sant’Erasmo is a now sparsely inhabited island and almost dedicated to agriculture.

The conformation of the island, completely flat and with a very particular terrain that allows the cultivation of numerous varieties of fruit and vegetables with a unique flavour, means that Sant’Erasmo has been known since the Middle Ages as “the vegetable garden of Venice“, since it has always supplied the lagoon city with the production of its gardens.

The island’s agricultural calling shows itself in various ways.

Almost all of its population, around 700 inhabitants, is in fact mainly devoted to agricultural activities and two of the island’s excellences, the violet artichoke and grape must, are celebrated in two important events in May and October. The production of thistles, asparagus and salt marsh honey is also renowned.

The island of Sant’Erasmo appears as a peaceful corner of the countryside, where vegetable gardens and vineyards, the real heritage of the island, are interspersed with canals and a small number of roads, located mainly along the coast. Sant’Erasmo is one of the few islands in the Venice lagoon where driving is allowed. However, only the residents’ cars circulate here, transported to the island in large boats called “Topo”, since Sant’Erasmo is not connected to the mainland by ferries. 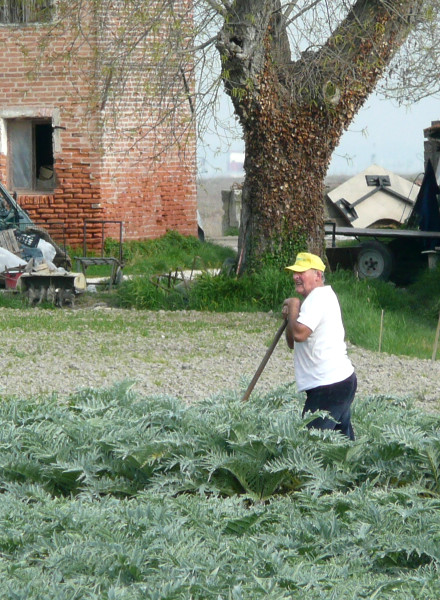 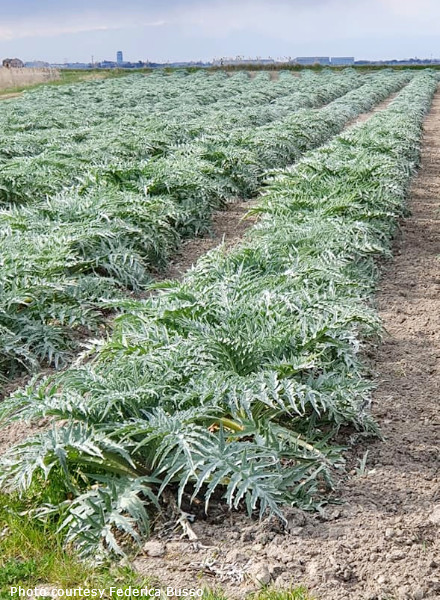 How to get to Sant’Erasmo: connections with Venice and ferries

The island is easily accessible by ACTV public transport (Line 13) from Venice, Murano and Cavallino-Treporti.

Every hour a vaporetto connects Sant’Erasmo with Venice (Fondamente Nove) in about 45 minutes, Murano (Faro) in 20 minutes and Treporti (Ricevitoria) in 30 minutes. We recommend starting from the “Capannone” water bus stop, to better discover the island.

The price of a single ticket is € 7.50 per person (valid for 75 minutes). Alternatively, you can take a tour of the islands of the lagoon at the price of € 20 per person (ticket valid 24h). Children up to 6 years travel for free.

Sant’Erasmo: what to visit

Sant’Erasmo can be explored on foot or by bicycle along flat paths suitable for all ages. Certainly, useful are a towel, to take advantage of a break in the shade of an orchard or to sunbathe on the “Bacàn” beach, and a camera to capture the breath-taking view that Sant’Erasmo offers on the islands of the Venice lagoon.

A visit to the Maximilian Tower and the Church of Christ the King is also a must.

The Massimiliana Tower, an Austrian military fortification with a circular plan erected between 1843 and 1844, the only example still existing in Italy, was restored and opened to the public in 2004. The tower currently hosts art exhibitions and cultural events and is about 1 km from the “Capannone” vaporetto stop.

On the opposite side of the island and near the “Chiesa” vaporetto stop, stands the Chiesa del Cristo Re. Sant’Erasmo” belonging to the Tintoretto school.

The heart of the island, on the other hand, contains the “wildest” part of Sant’Erasmo: rich in cultivated fields, it is the ideal place for birdwatchers. 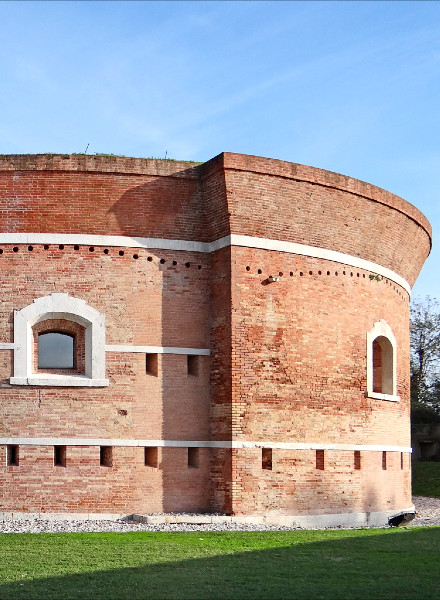 Sant’Erasmo: are you allowed swim?

The island of Sant’Erasmo is also known for its beautiful “Bacàn” beach, which can only be reached by vaporetto or by boat. A favorite destination for Venetians for their summer outings by boat, it offers the opportunity to moor near the shore and enjoy a refreshing swim or the sun lying on its soft shore. The Bacàn beach, dominated by the ancient Massimiliana Tower, is located on the southern tip of the island and is about 1 km from the “Capannone” vaporetto stop, following the Strada Vicinale dei Forti. 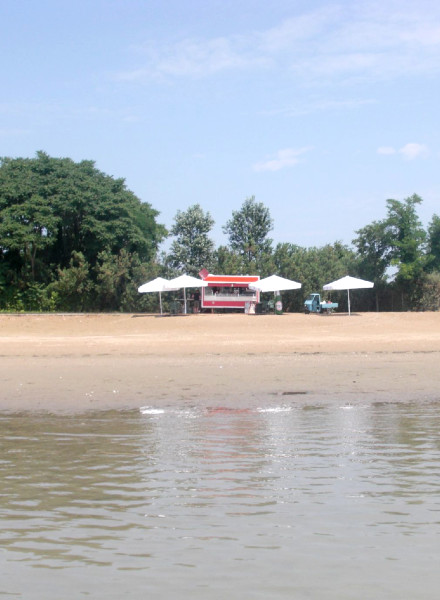 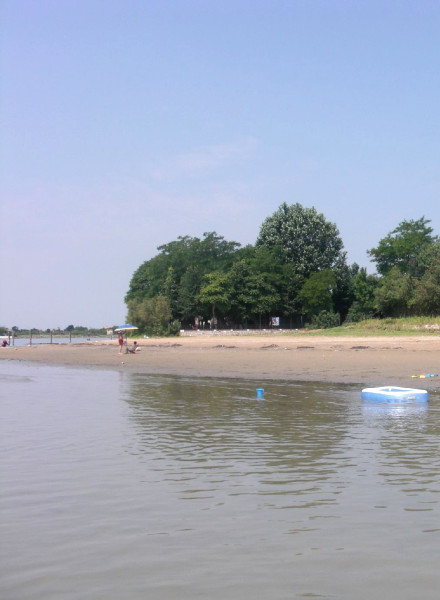 The flat structure of the island makes Sant’Erasmo perfect for a bicycle outing, away from the tourist flows and immersed in wild nature. You can follow a short and easy route, about 8 km long, to discover the island and fully enjoy its beauty:

Visiting Sant’Erasmo by bike starting from Camping Ca’Savio is very simple: you can rent bicycles directly at the campsite and reach the Treporti pier (Ricevitoria) in just 10 minutes. From there, aboard a vaporetto, you will reach your destination after a short journey of about 30 minutes. The price of transporting the bicycle involves a small surcharge of € 1.00 per bike.

Alternatively, you can also rent bicycles on the island at the B&B Il lato Azzurro, about 15 minutes’ walk from the “Capannone” water bus stop. The rental price is € 5.00 for the first 2 hours and € 1.00 for each additional hour. Reservation recommended. 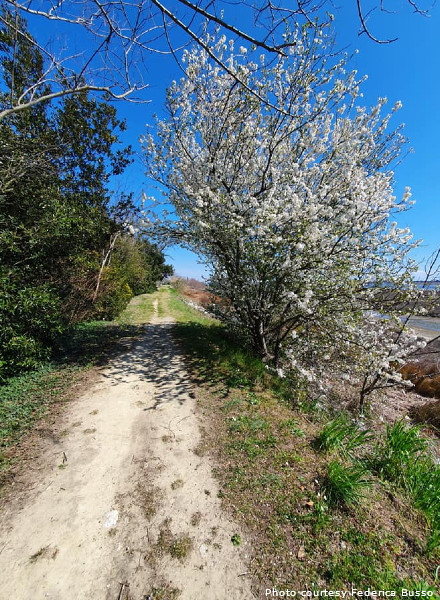 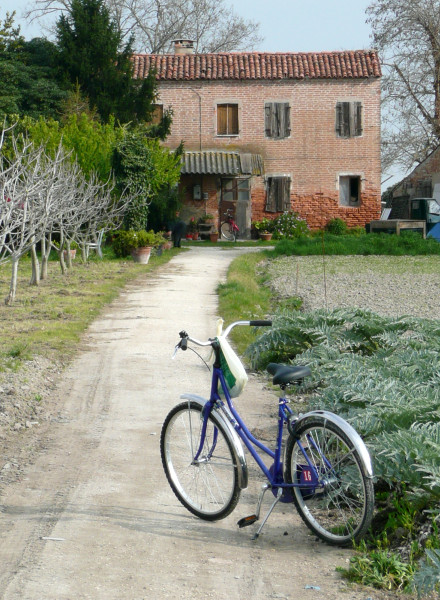 The purple artichoke and festivals

During village festivals, the island of Sant’Erasmo turns into a lively village that attracts many visitors, fascinated by its full program of cultural events, including the Purple Artichoke Festival and the Must Festival.

The purple artichoke, also known as “Sant’Erasmo artichoke” is a tender and fleshy artichoke with an elongated shape, whose bracts are dark purple in color. Cultivated on the island of Sant’Erasmo for hundreds of years, the purple artichoke is a Slow Food Presidium and on this island it has found the ideal environment to be cultivated: a clayey soil, well drained and with a very high salinity, protected from the cold Bora wind, small mounds of land erected towards the sea. In Sant’Erasmo, the artichoke season begins at the end of April with the “castraure” harvest, a real delight available only for fifteen days a year. These are the first small tender shoots of the artichoke, cut to allow a more luxuriant growth than the other shoots and at the base of many local cuisine. The purple artichoke harvest continues until mid-June with the sale of the island’s crops in the markets of Venice. The Purple Artichoke Festival therefore celebrates this precious production every second Sunday in May at the Massimiliana Tower, where you can taste and buy local artichoke-based products.

The Festa del Mosto, organized every first or second Sunday in October, is instead dedicated to the “torbolino“, a slightly sparkling and sweet wine made from white grapes and not totally fermented, also an excellence of Sant’Erasmo as the purple artichoke. 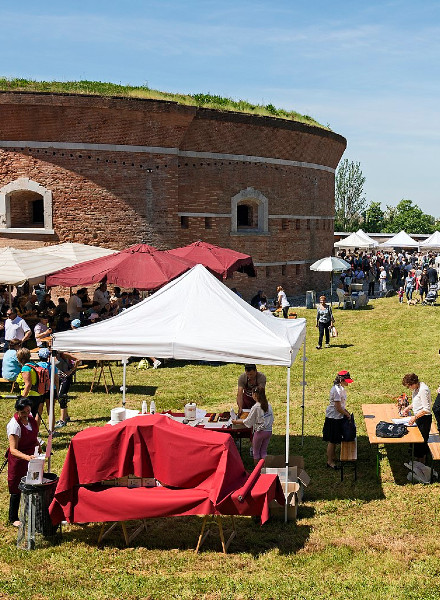 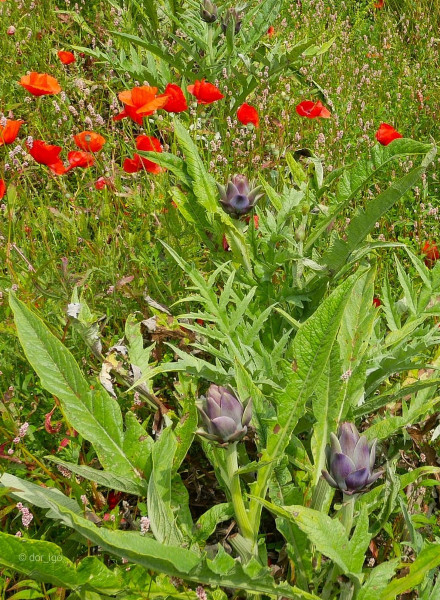 Where to stay in Sant’Erasmo?

The island of Sant’Erasmo offers few accommodation options, much more widespread, however, in the neighboring islands of Burano and Venice and on the Cavallino-Treporti coast, which hosts Camping Ca’Savio, the ideal place for a beach holiday immersed in the nature, a few minutes from the wonderful islands of the Venice lagoon. Discover the accommodations and pitches of the campsite and book your holiday already a stone’s throw from Sant’Erasmo!