The most beautiful beaches around Venice

In our collective imagination, Venice is the city of a thousand bridges and canals, of picturesque gondolas sailing on the Grand Canal, of entranced tourists who walk through the narrow streets admiring beautiful ancient buildings and museums. However, the splendour of Venice goes far beyond the countless attractions that populate its historic centre. Numerous beaches, some even a few minutes by boat from the city, contribute to the splendour of Venice and its surroundings and represent an immense historical-naturalistic heritage unknown to many, but which is certainly worth discovering.

The beaches of Lido di Venezia, Cavallino-Treporti and many more: all different from each other. Give you the possibility to spend a great day in the outdoors.

Follow us on our journey to discover the most beautiful beaches around Venice!

Lido di Venezia is a thin island about 12 km long that divides the Venetian lagoon from the Adriatic Sea. Bordered by the ports of San Nicolò and Malamocco, people have lived here since ancient times. Loved by famous poets and writers, including Mann and Byron, and appreciated in the 1920s by intellectuals and nobles for its tranquillity, the island of Lido still retains a calm and slightly retro atmosphere, which is revived every September by the occasion of the Film Festival.

Due to its proximity to Venice, which is only 10 minutes by motorboat, Lido is considered the „beach of the Venetians„. Here there are numerous bathing establishments where it is possible to rent sunbeds and umbrellas, but above all the typical huts, large cabins with awning and veranda. The island also offers free beaches including the wide and uncrowded beach of San Niccolò and that of Alberoni, an oasis protected by the WWF due to the presence of numerous sand dunes, habitat for rare sea birds, such as bee-eaters.

During a visit to the Lido of Venice it is a must to look at the sea while walking on the Murazzi, the Istrian stone dams built by the Republic of Venice in the eighteenth century to defend the island from erosion and stop at Malamocco, the first historical nucleus of Venice, for a visit to the Palazzo del Podestà which houses a rich collection of archaeological finds.

Do not be surprised if you see bicycles and cars around: Lido di Venezia is one of the few islands in the Venetian lagoon where you can drive a car or ride a bicycle, a completely different reality from Venice!

If you are staying at Camping Ca’Savio, you can easily reach the Lido di Venezia by bike, taking the boat at Punta Sabbioni. 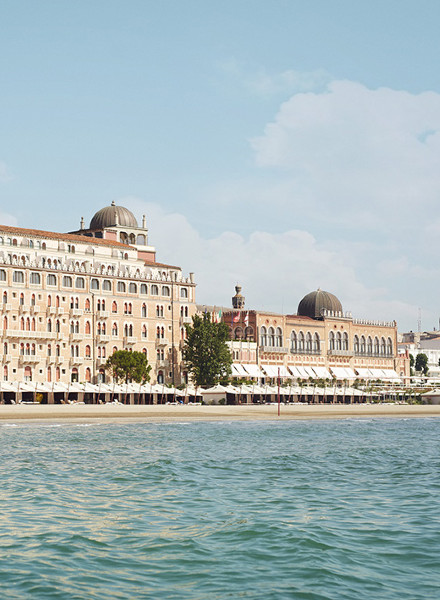 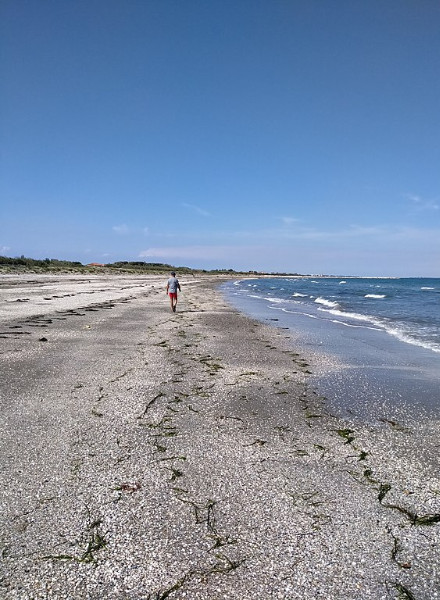 Located less than 30 minutes by boat from Venice, the Cavallino-Treporti peninsula is the place for open air tourism. For over sixty years, tourists from all over Europe have been spending their holidays here in one of the numerous campsites, like Camping Ca’Savio. The peninsula overlooks a large 15 km long coastline divided between the sea and the lagoon.

The environment of Cavallino-Treporti is wilder: numerous dunes, which are home to various migratory species of birds including the Kentish Plover, divide the beach from a lush and fresh pine forest where sea pines, domestic pines, black and Aleppo pines, tamarisks and Bohemian olive trees flourish.

Thanks to the calm and shallow sea and the wide beach of fine golden sand, for the most part free from bathing establishments and protected by a few rock dams that do not obstruct the view towards the horizon, Cavallino-Treporti is the ideal destination for many families who want to spend holidays in peace and in close contact with nature.

Since 2006, the area has been continuously awarded the „Blue Flag„, the prestigious international recognition given to tourist destinations that stand out for the cleanliness of their waters, the quality of services offered to guests and respect for the environment.

Camping Ca’Savio proudly looks after a part of this territory, contributing to the preservation of the ecosystem of the dunes and trying to keep the landscape value of its beach intact. 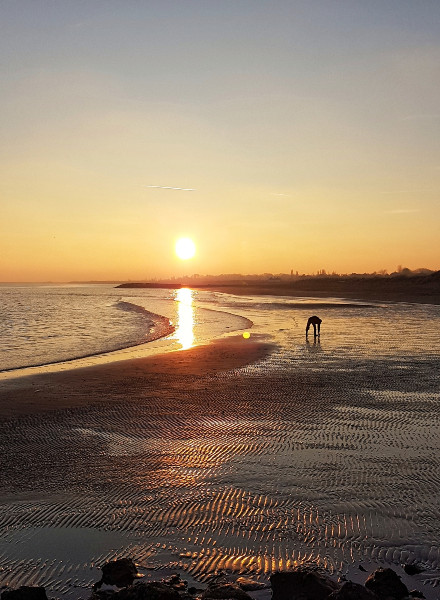 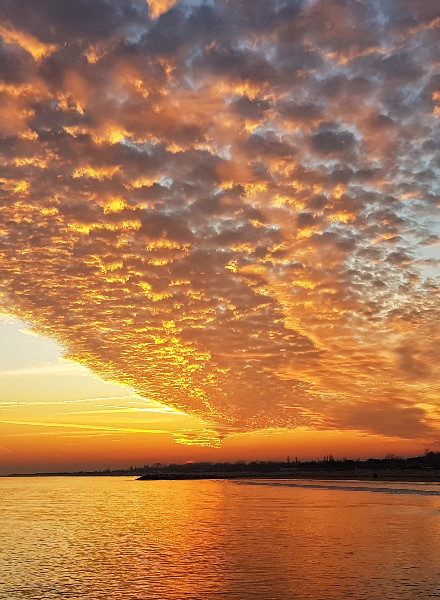 Punta Sabbioni, located at the southern end of the Cavallino-Treporti peninsula, both overlooks the Adriatic Sea on one side and the lagoon on the other. The area is very popular for the beautiful view it offers over the Venice lagoon and for the wide beach of about 2 km long and protected by dunes, which welcomes many visitors every day, including 4-legged ones.

Punta Sabbioni is the ideal destination for a walk in the dense pine forest (now a nature reserve) located near the beach, for a bike ride around the S. Felice seafront or for a romantic walk on the water’s edge to the unmistakable pagoda-shaped lighthouse built in 1910 on the dam that delimits the Venice-Lido inlet. Here you can admire wonderful sunsets over the lagoon, perhaps enjoying an excellent fish-based dinner in one of the restaurants overlooking the harbor, as well as set out to discover Venice and the islands of the lagoon. 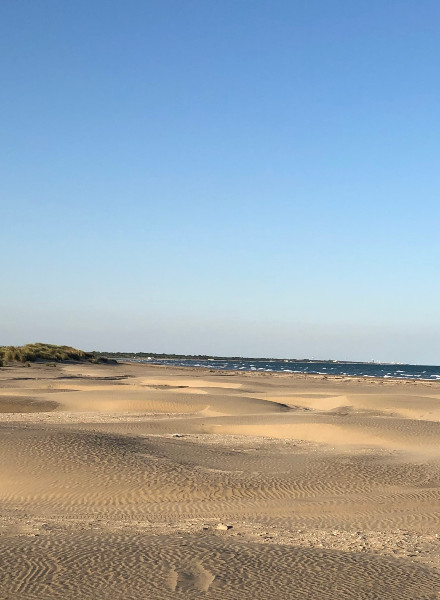 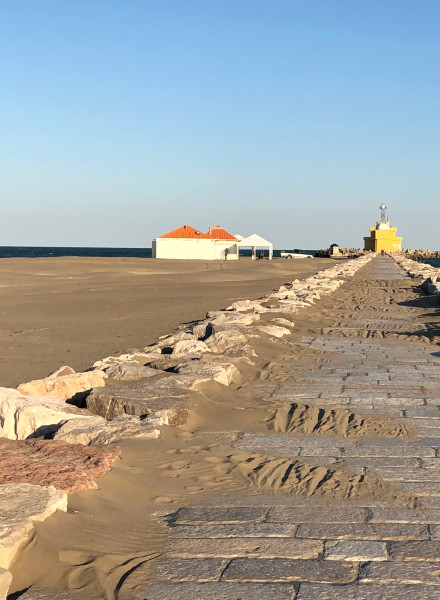 The city of Jesolo, located between the mouth of the river Sile and the mouth of the river Piave, borders the nearby town of Cavallino-Treporti. The city boasts a 15 km long beach, full of bathing establishments and hotels facing the sea, characterized by the unmistakable wooden piers, built to defend the coast.

Unlike the neighboring towns, chosen by tourists for the tranquility and natural environment they offer, Jesolo has always been loved for its lively nightlife and the many events that take place there, especially during the summer. Here you will find attractions, bars, restaurants and shops open until late in the evening located on the longest pedestrian area in Europe and you can end your day at the beach in one of the many clubs, even on the beach, open until late at night. 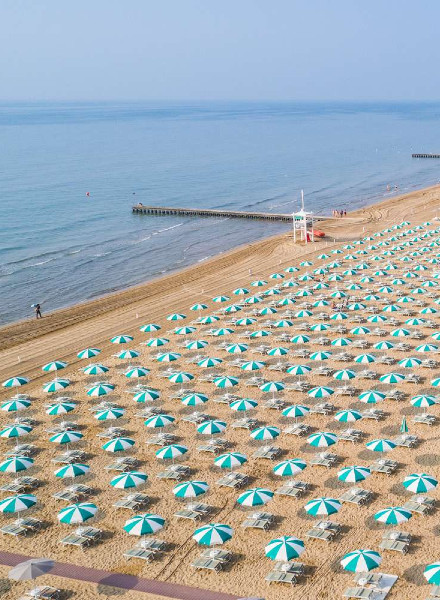 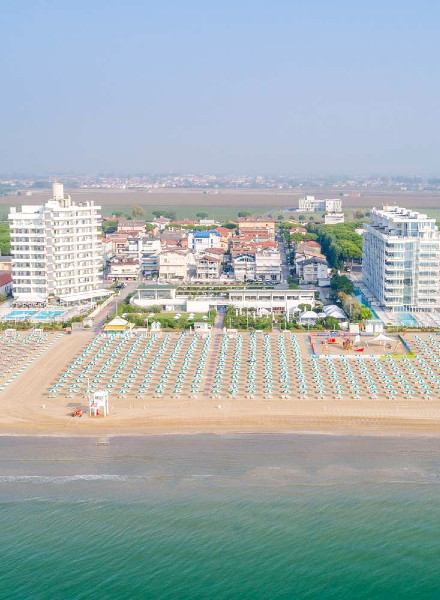 These are some of the most beautiful beaches near Venice, certainly very different from each other, but chosen by us precisely for their diversity, with which they certainly contribute to increasing the splendor of Venice and making it unique in the world.

During your holiday at Camping Ca’Savio, you can always rely on the assistance of our Customer Care Office, who are able to give you guidance and tips to discover other beaches and further practical information to reach them.

If you are already interested and want to plan your excursions in advance, you can always write to us: we will be happy to help you and provide you all the information on the beaches and the area and, if you wish, also on our offers and other information you might require.